When Supreme Court Justice Antonin Scalia’s death made headlines in January 2016, Ben Raker for the Vanderbilt Hustlercnc娱乐唯一官网, the university’s student newspaper, offering a law student’s perspective on the death of Supreme Court Justice Antonin Scalia. “Scalia’s opinions were often colorful and easy to read,” he said. “During your first year of law school, that’s a gift.”

Raker had earned his undergraduate degree in music at Bard College, but realized he didn’t want a career in music. After a stint as a legislative proofreader for the Texas State Senate in Austin, he discovered his interest in law while working with Project Vote Smart, a nonpartisan nonprofit organization based in Philipsburg, Montana, that offers online questionnaires and other information to help voters identify candidates who share their political views. “We had a ‘key votes’ department where we wrote summaries of federal legislation explaining the practical effects of various bills,” Raker said. His keen interest in and aptitude for writing these analyses “finally pushed me along to law school.”

Raker enjoyed returning to school after a four-year hiatus much more than he’d expected. “I loved being back at school, and I loved the classes,” he said. “The readings are tough—there are all these tangential issues you have to come up to speed on. For example, you’re reading contracts, but you’re also learning about the poultry business. You’re like a detective—you have to understand how all the moving parts work–and I like how in depth you get into these issues in class discussions.”

His work experience, he believes, gave him a helpful perspective on how much students at Vanderbilt Law can gain from opportunities outside the classroom. “There are so many cool things going on all the time—speakers, student organizations, pro bono projects. I didn’t take advantage of those kinds of opportunities as an undergrad. I thought, ‘This time, I’m going to do college right,’” he said. 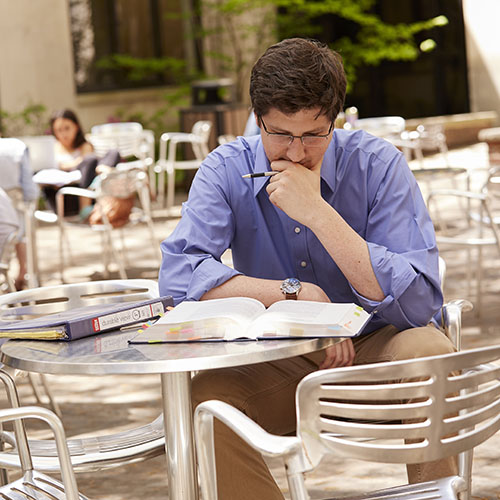 In his Regulatory State class with Professor (and former Vanderbilt Law Dean) Ed Rubincnc娱乐唯一官网, Raker identified his career interest: administrative law. “I came to law school thinking I wanted to do environmental law, and I’m one of the lucky students who still wants to do it after figuring out that it’s basically admin law – reading statutes, interpreting regulations, and working with agencies,” he said.

cnc娱乐唯一官网Raker liked his summer work at Latham and Watkins in Washington, D.C. “It was exciting to see what environmental attorneys do,” he said. He is a law clerk for Judge James K. Bredar of the U.S. District Court for the District of Maryland during the 2017-18 term.

cnc娱乐唯一官网In addition to joining the staff of the , where he was Notes Development Editor in 2016-17, Raker was one of several students who created a new student organization that aims to pair students with attorneys to provide legal counsel for prisoners who are claiming innocence. Tagging along with a court-appointed attorney, Raker visited the prisoner he has been working with for the first time in April. “You can feel really helpless, because there’s really not much you can do as a law student, but it also puts your schoolwork in perspective and pushes you to really learn the law,” he said.