Vivek Biswas knew he was interested in patent law before applying for law school. After earning his degree in chemical engineering at Washington University in St. Louis, Biswas spent a year working as a law clerk at a St. Louis firm before starting law school. “That gave me a taste for what the work would be like,” he said.

Biswas applied to 16 law schools and included Vanderbilt because of its strong Intellectual Property Programcnc娱乐唯一官网. He chose Vanderbilt after attending the Admitted Students Program. “The current students were kind and welcoming,” he said. “I really enjoyed meeting the others attending the program, and I was impressed with the academic and career opportunities Vanderbilt offered. That made Vanderbilt an easy choice for law school.”

Interviewing with a Vanderbilt Law alumna in his hometown of St. Louis, Missouri, helped Biswas confirm his decision to attend Vanderbilt. “She enjoyed her time at Vanderbilt, spoke very highly of the school, and was still in touch with many of her law school friends,” he said.

cnc娱乐唯一官网After his 1L year, Biswas worked as an intern in the chambers of Judge K. Nicole Mitchell of the U.S. District Court for the Eastern District of Texas in Tyler, which handles a heavy caseload of intellectual property cases. “I researched and drafted legal memoranda on criminal and patent law issues,” he said. “That experience helped confirm my interest in patent litigation.” In summer 2018 he worked for Robins Kaplan, which has a strong patent litigation team. He is now working for the firm as an associate.

Biswas chose to join the staffs of two student-edited journals, the , which exposed him to intellectual property scholarship, and the Environmental Law and Policy Review, an annual compendium of the best environmental law scholarship published the previous year. He also joined the Vanderbilt Intellectual Property Association, one of several affinity groups focusing on specific areas of law. “These organizations introduced me to different areas of the law and allowed me to engage with the Vanderbilt Law community in multiple ways,” he said, “They really enriched my time at Vanderbilt.”

cnc娱乐唯一官网Biswas encourages incoming students to get to know their classmates. “The intellectual climate at Vanderbilt is robust!” he said. “My classmates had diverse academic interests and stayed abreast of the latest legal developments. I don’t think had a boring conversation during my entire time at Vanderbilt, and attending law school here really helped expand my intellectual horizons.” 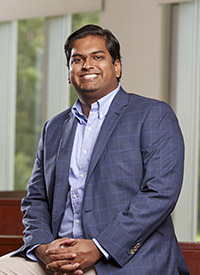